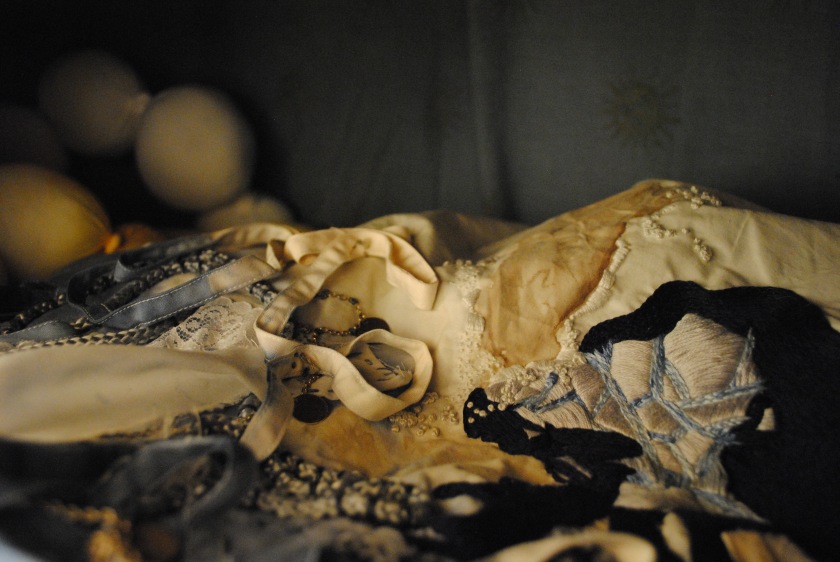 February is my three year anniversary of having an abortion.

Anyone that has gone through an abortion knows that it’s a month long process at least. The exact day was February 17th. It was cold and lightly snowing on and off all week. I remember going for many walks prior to the procedure. I remember watching the trees through our second floor windows and saying nothing at all. I felt empty of words.

I suppose that’s why when I was bed-ridden and needed something to do with my hands, I turned to embroidery instead of drawing, writing, or painting. All familiar modes of expression felt too weighted compared to my delicate lightness. I learned later about the relationship between embroidery and death throughout history and realized I not only made space for myself to enact a traditional female role, but was making mourning embroidery. It had my blood on it. It spoke for me.

Embroidery taught me that you must love the scissors that sever and the needle that mends.

Eventually I started writing a lot, though in short fragments. I could not write a perfectly linear and coherent narrative because that’s not how I have experienced it. None of it has been shared much, for the likely and obvious reasons.

My desire to describe the trauma was born (pun intended) by the disappointment of how abortion is typically talked about, privately and publicly. Surely there are other people that feel devastated by having an abortion, yet also recognize that it’s better for themselves and the life growing inside them to terminate the pregnancy.

Actually, better isn’t really the word for it. I don’t know for certain what would have happened if I had not chosen to abort. I do know that me and my husband could barely afford to support ourselves and I had a lot of health problems that were already making pregnancy extremely difficult only eight weeks into it. I do know that I spent my whole life believing that I could not be a mother. That’s how I ended up pregnant in the first place. (The copious amount of whiskey didn’t help. That’s right. It can really only take one time, kids.)

Better is not the word for it. I have seen people pull through tremendous difficulties to establish and maintain the security and well-being of their families. I have also seen people become bitter, sad, demanding, or mean. Performing a biological function does not make you a giving, loving, and courageous human being.* It’s something you build, like a muscle, with repeated use. It’s something you learn to see in yourself.

I try to be giving, loving, and courageous. I know that when I am pregnant again someday, I will create a good home for my child. I’ve had almost three years to carry the memory of an ultrasound in my heart. Almost three years to learn how to be invested in myself and in a future that includes children who know love.

The time does not feel wasted. It would be a waste, however, if I continued to hide what has helped me grow so substantially.

About three years ago on February 17th I looked at an ultrasound and with a rare clarity regarded the tiny orb of life as perfect. It is still perfect.

* It is, of course, absolutely possible to be giving, loving, and courageous human beings without having any children. I just dislike the general assumption that birthing a child magically turns you into a parent.