Two weeks later, I am ready to sit down and share a bit about me and Liz Layton‘s exhibition Moderna Blondin, especially the reception, during which time the performance took place.

I did not expect that peculiar, miraculous thing that happens sometimes with painting, drawing or sculpture, where you surprise yourself and “what this is about” expands exponentially right before your eyes. This may be because I have no experience with theatre, and on account of there being lines and such, assume that there is little room for surprise. We had a loose script, we rehearsed, and everyone involved was capable and committed.

Perhaps I am giving too much away here, but I believe that what made the performance was actually what I didn’t plan and couldn’t expect. I did not, for example, plan for a drum circle to be in the gallery prior to the performance, right next to the installation. I did not expect people to not realize I was a real person underneath the dark purple fabric. And I definitely didn’t plan to mimic my episodes, periods of time when I am disoriented, dizzy, etc. 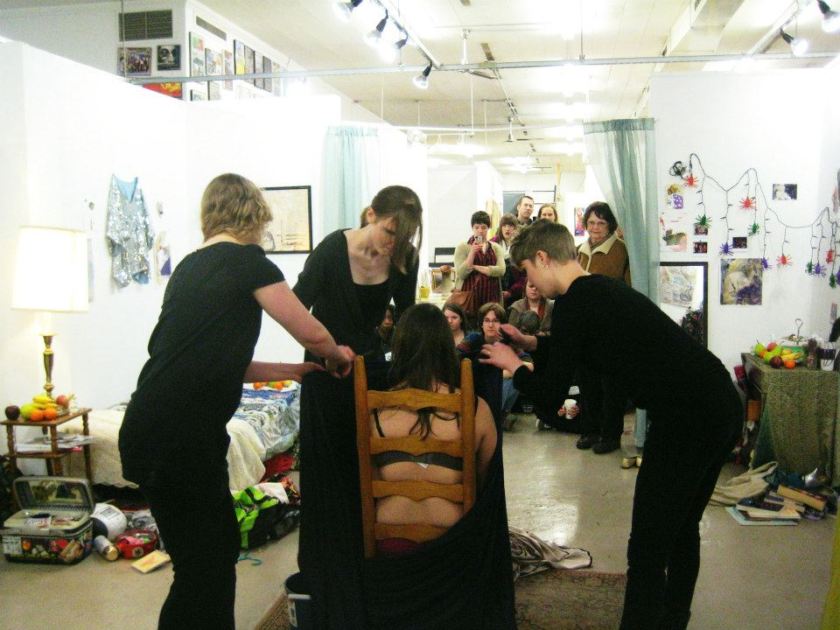 That’s what makes it exciting for me, all the things I did not expect. I am grateful for the interaction that I had with the audience, even in moments of discomfort. When people debated what my gender was under the fabric, when someone dared another to “punch it in the face”, when a child asked someone, “Do you want to see the person?”, or when people became alarmed at realizing I was sitting there, able to hear their conversations — all of it was really fascinating.  Even the drum circle, which I was admittedly not thrilled about, played an important role.

And thankfully, I’m not the only one who felt that fascination and impact. Really. Thank you.

Speaking of, I’d like to thank our performers — Katharine Hache, Jennifer Culp, and Myranda Kreyenbuhl-Porterfield. Each one performed perfectly, despite not being paid (though a “thank you” brunch is in order), and they really brought themselves to their roles whole-heartedly. I appreciate that a great deal.

I’d also like to thank Liz for working with me because without her work and her presence, I’m not sure I would have thought of doing this on my own. She an illuminator, both literally and figuratively.

More pictures are available at my Flickr account, as usual. Also, Liz has prints from the show’s work in her Etsy shop. (Kate Bush!) I’m planning to put together a zine with images of the work in the show, artist statements, short essay(s), and hopefully an interview. So, that’s on the way.

The exhibition — including our paintings and the installation — will be up in Nelson Fine Art Center until the end of March. 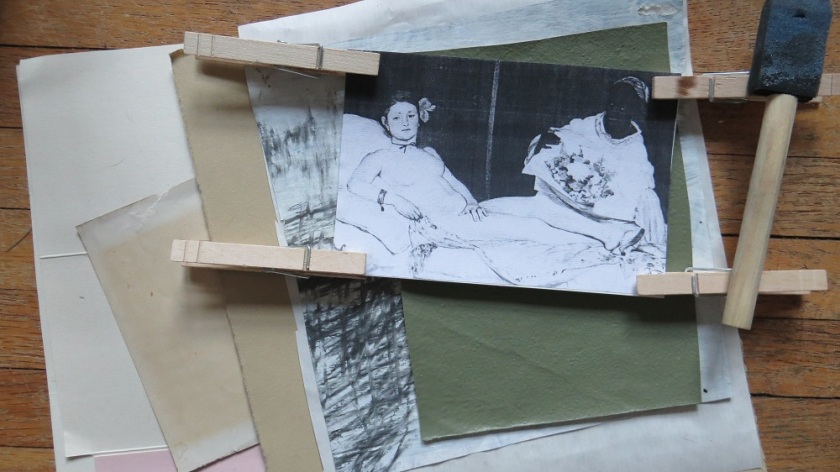 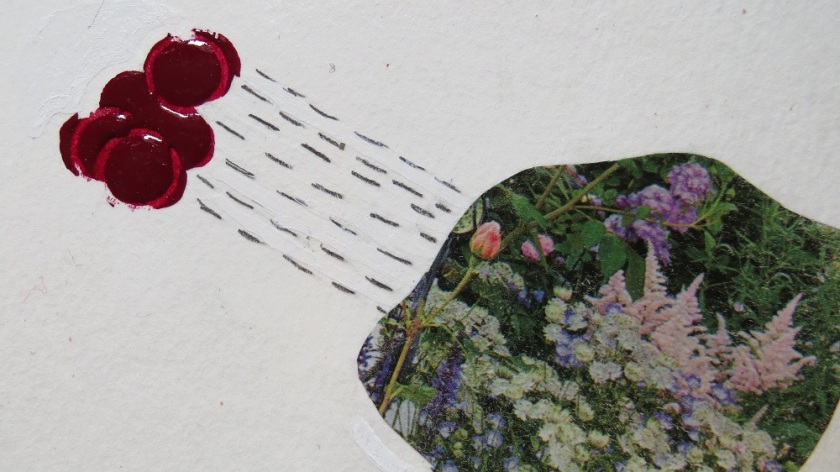 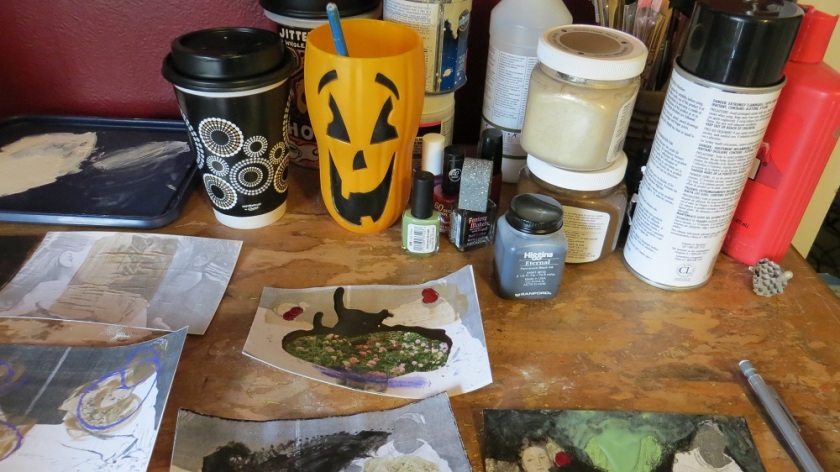 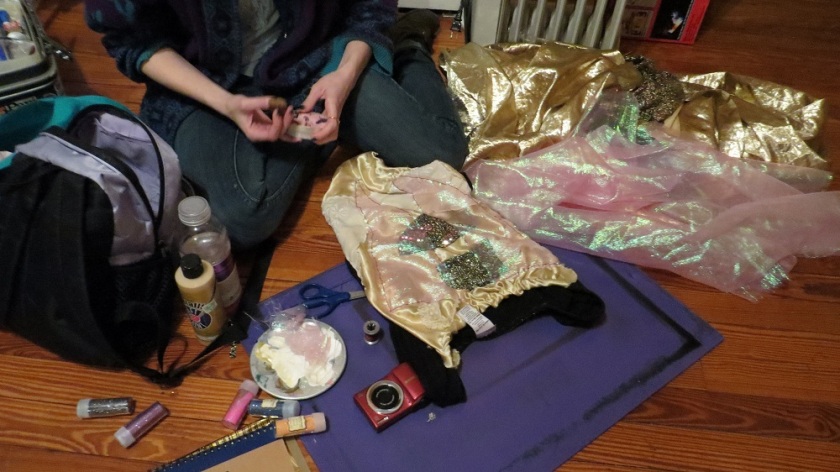 I’m not a very good blogger. There. I said it.

My intentions are always good in the beginning with occasional moments of rejuvenation, but then I fall flat the moment I am distracted by something shiny or tired of my own endless spewing of words, words, words. For someone that has such a shaky relationship with words, I am terribly verbose.

Explanations aside, I’d like to move onto something (hopefully) more interesting: my work in progress.

Aside from writing articles, I’ve also been putting together a proposal for a group exhibition and working on an upcoming exhibition with Liz Layton. And by “upcoming”, I mean in a little less than three weeks.

Here are this details from the Facebook event page:

Moderna Blondin is an exhibition of work by Liz Layton and Jaime Santos-Prowse containing paintings, installation, and performance. This new work is inspired by “The Magician’s Cape”, a Swedish fairy tale written by Anna Wahlenberg with John Bauer’s illustrations. It’s also inspired by Manichaeism, Ingmar Bergman’s “The Virgin Spring“, Sofia Coppola’s “The Virgin Suicides“, the obsession and idolatry of adolescence, and glittery sparkling things.

The reception will be catered with sweets and treats. Prints of the artists’ original art work will also be available for sale at this time. The paintings and installation will remain in the gallery until the end of March (specific date TBA). The reception is free and open to the public, though the artists and musicians would greatly appreciate donations.

There’s still a lot of work to do. Cue sudden stress baking. Chocolate chip coconut or blueberry anise scones, anyone? How about tomato rosemary? Cranberry orange?

By the end of the month, I may very well bake every variation of scone imaginable. My pants agree with my husband, that this is perhaps an unhealthy development. I’ve recently acquired three new literary / art magazines so maybe I can make myself read in the tub the next I feel an overwhelming desire to bake.