Hoichi, The Earless, the third story in Kwaidan was perhaps the most visually and conceptually engaging to me. It explored a lot of things that I think about almost daily.

A story is not about facts.

The second story in Kwaidan was The Woman of the Snow, about a ghost that can claim the lives of mortals. She appears to blow onto their faces, freezing them to death, and the victims are later described as having no blood (or something like that). Despite her desire to kill people during snowstorms, she is not entirely absent of other desires or pity. The cold, frightening, powerful ghost compared to the subservient, warm, loving wife is interesting, but most especially after you can see where they overlap and how her sense of power and compassion affects her speech.

In this story, the theatrical nature of the environments are heightened one step further. There are scenes where the environment does not look real at all, and surrealism takes over to depict the true feeling of the moment. Visually speaking, that was perhaps my favourite part of this story. The movement of the trees during the snowstorm (along with the music) and the first meeting of the ghost woman were, of course, not really something I could represent in a single screen shot. Or even multiple. It was a strange combination of stillness or silence, and specific, graceful, unhesitating action.

At the end, I thought a lot about identity. You might not want to read this part if you haven’t seen the movie. On the surface, she decided one night to test his vow of silence. He failed her test, and she didn’t kill him because of their children, but she did leave them immediately. Given the context, it’s not surprising at all that he would tell his wife about that night. So, really, why did she suddenly decide to leave?

It reminds me of other stories I’ve read about female ghosts, entities,spirits and so forth that match up with men, then suddenly leave and “return” to their dominant identity.

I learned how to take screen shots. Finally.

We watched Masaki Kobayashi’s Kwaidan (1964) the other day. The stories and their theatrical visualization were really engaging, especially in the first three. The Black Hair had a moodiness to it that felt a bit gothic, but not merely for the sake of being “dark” and “creepy”. There were also some nice spatial relationships happening in quite a few scenes. My favourite part of it all was how his memory of his first wife was mostly confined to her work as a weaver, yet the lighting would change. When he was caught up in terror, the shape and colour of his terror changed rapidly. The hair, the separation of love and desire, the posturing of power, the decay from neglect, overgrowth, etc. are all old lovers. (As always, click image to view larger.)

I watched Flesh and the Devil a while ago. Leo and Ulrich are best friends that fall in love with the same woman, Felicitas, who actively manipulates men to get what she wants from them.

According to IMDB, “The first scene between John Gilbert and Greta Garbo, in the train station, was also the first time Gilbert ever saw Garbo. He falls in love on camera, so completely in love that he never went back home to his wife.”

Last night I went to see Easy A with Husband and a friend. It’s basically a movie about how Olive (Emma Stone), a girl with a pretty non-existent/good girl reputation became the school slut all because she lied about having sex once, which then escalated into more lies and corsets with red. Since it’s a comedy – and based on the previews – I assumed it would be a very glib, light-hearted representation of School Slut mythology. Although I’d love to see a well made movie about this subject, I completely accepted the fact that this was not that movie. Besides, I have a crush on Emma Stone, especially after finding out her middle name is Jean. She’s not a true redhead, but I can forgive her for that. Some women were just not meant to be blond. (Or, in the case of Lady Gaga and Tori Amos, brunette.)

So, back to the point, this isn’t criticism so much as it is observation and notation.

People that she’s never talked to before will write “SLUT” in lipstick or permanent marker across her locker. They’ll ask her if she really blew the whole football team in the locker room after practice, just so they can have the pleasure of laughing at her to her face. They’ll blame her for break-ups. They’ll casually grope her breasts or ass while passing her in the hallway, and if she complains they’ll say she shouldn’t dress like such a whore. They’ll say she wants it. And she’ll never be asked out on a date because “she’s the kind of girl you have fun with, not the kind you date or take home to mom”.

I won’t get into what actually happened in the movie too much because it’s new and there are probably many people who haven’t seen it, or even heard of it yet. Despite some really dramatic moments acknowledging the consequences of (sex-related) lies, the movie maintained a sense of humor. I can always appreciate that.

The only thing that bothered me was that the movie made a big deal about Olive lying and that it was her fault and her responsibility to clear everything up, and yet there was little to no accountability for the people who lied and spread malicious rumors about her being a “dirty skank”. Now, in my opinion those people don’t matter anyway. There will always be those kind of people. Haters, you might say. And a lot of decent kids behave that way just because they get caught up in what’s going on. You can create (weak) connections with other people by talking shit about a common enemy. If you’ve got some fresh gossip, people will crowd around you and listen closely to every word. It doesn’t even matter if it’s true.

Still. How about a little acknowledgement of responsibility from the rumor mill? How about, “I’m sorry that I didn’t listen to you when you tried to tell me you didn’t sleep with that guy,” or, “I’m sorry I told everyone that you blew three guys at a party”? Sure, she blurred the boundaries of responsibility a whole lot with her clothing, her attitude, and her lies. But roles are not something created by one person.

At least she ended her ‘This is how it really happened’ live webcast with something to the effect of how it’s no one’s business who she has sex with or how often. 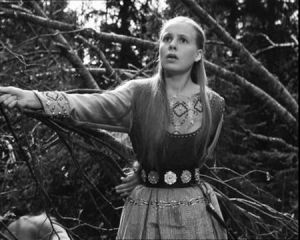 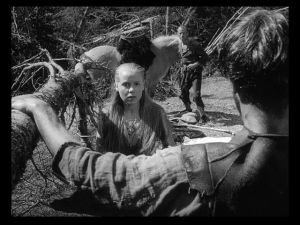 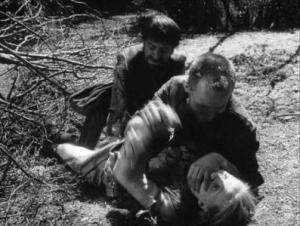 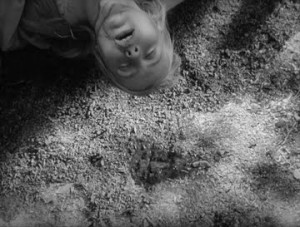 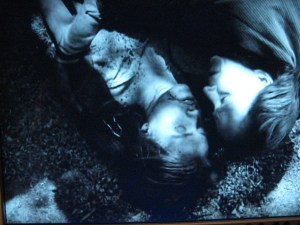 I watched Wes Craven’s The Last House on the Left (1972) the day before yesterday, knowing full well that it was going to be difficult for me to stomach. Horror films aren’t exactly my thing to begin with, and this particular film deals with a truly horrific ordeal for two young women. I could shrug it off as a movie, but rape and murder aren’t fiction, only this particular instance is fiction.

Like The Virgin Spring, there is a “bad”  girl (Phyllis) and a “good” girl (Mari). Although, Craven more explicitly demonstrated the way that the innocent girl is not so in the black and white sense. She drinks, she talks about sex, she doesn’t wear a bra, she says, “tits” to her parents when talking about bras, and she’s more than willing to “score some grass” before the concert. This may be in part the bad girl’s influence, but the good girl is nonetheless intrigued.

Mari: The leaves are really beautiful.
Phyllis: Yup, they’re really starting to change. I guess winter’s comin’ on!
Mari: Yup, Hey! I changed this winter!
Phyllis: What do you mean you changed?
Mari: I mean my breasts filled out!
[Phyllis laughs]
Mari: I mean they were nothing last summer!
Phyllis: I didn’t know you last summer!
Mari: Well, they have!
Phyllis: Well, congratulations!

And an even “uglier”, “animal-like” woman (Sadie) was in on the rapes and murders. Ironically, she refused to have sex with Krug earlier in the movie because of her newfound female independence. She reminds me of women who decide to be “one of the boys” because it’s better than being one of the girls. Safer, anyway.

Takes one to know one, I suppose.

It’s not really a good movie. I was watching the whole time for special moments or stills to take, but nothing much struck me as interesting. Beyond the implications of being really sickening.